NOTE: This kit was reproduced from the original GM stencil kit and released by us in 1985. Featuring all alignment notches originally used by GM in their stencil including the part number.  All stencils are precut for specific body panels (not something that has to be cut from a sheet). Chevrolet first released this stripe in 1967 and continued it into early 1968 before replacing it with the the D90 wrap around stripe that turned under the emblem engine and continued past the front tire ending on the rear section of the door.

We do not offer this kit in a vinyl format due to the compound curves in the front fender area which would require multiple sections and overlapping of the stripes. 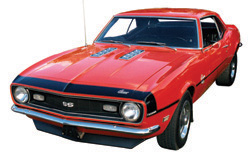